Outstanding in our field

The Tools of Field Recording

In the word of handheld digital recorders (and believe me, it is a world) Zoom is one of the large continents. The Zoom H4n Pro, like its predecessor, the H4n, is the kind of product you probably don’t need even to read a review of. Field recordists, podcasters, musicians, film makers and bootleggers use these things all the time. It may just be all you need for field recording. If you’re newish to field recording and looking for a solid and reliable bit of kit at a fair price, you could buy this now and be up and running.

But we have some space to fill and if you are field recordist then attention to detail is one of your character traits, so you’ll be wanting to know a bit (or a lot) more before investing your $200/£180/€200 (approx). 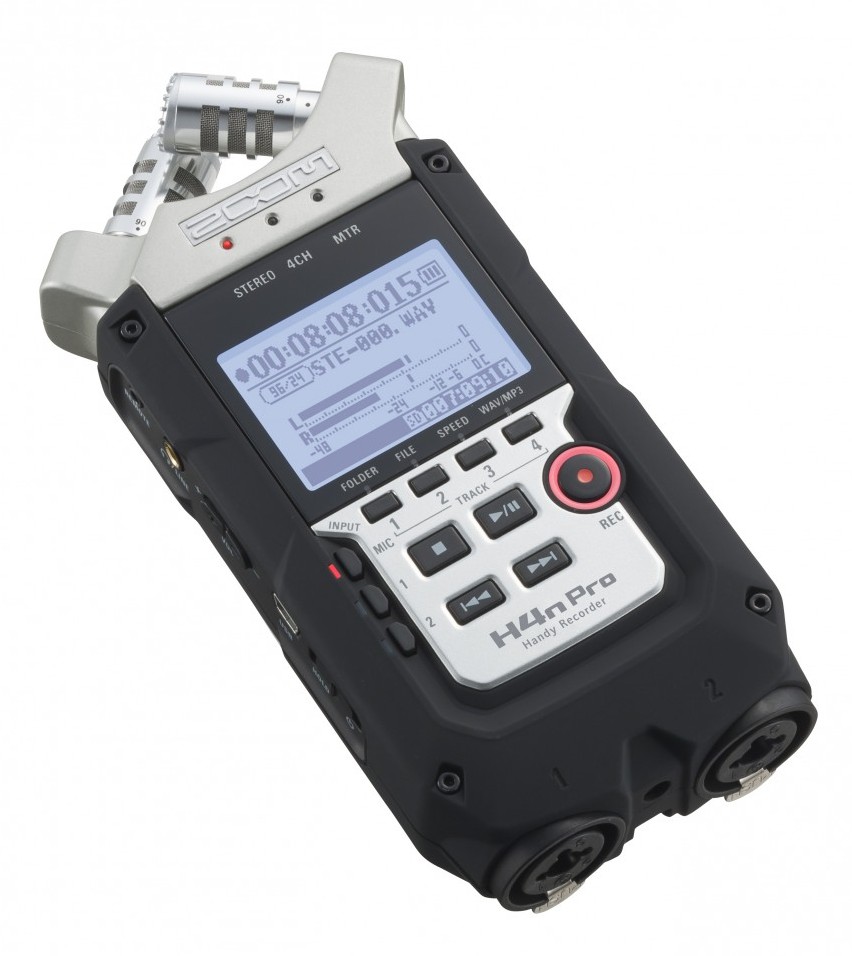 The H4n Pro digital multitrack recorder was released in 2016 (a full seven years after its predecessor, the H4n, which tells us something about the reliability and high specifications of Zoom products – this is no Apple-style built-in obsolescence operation). It has the characteristic, X/Y stereo microphones on top, an LCD display, and innumerable buttons, dials, inputs and outputs (which I will numerate below). It weighs a pleasing 294g/10.37 ounces, making it perfectly portable, but substantial in your hand. The rubberized surface means you won’t drop it easily.

And before we go any further I need to mention the preamps. It has great preamps. Preamps can be the key to high quality recording, and that was the killer upgrade that made the Pro a big step forward from the plain old H4n.

Here’s the full list of the H4n Pro’s features

And here’s a minute and a half of a nice man from B&H Photo Video showing you some of those features:

See, I told you the preamps were good.

I have spent several hours reading all the available reviews of the H4n Pro to provide an overview of professional (and not so professional) opinion. Here’s what folk particularly like, and dislike.

A preamplifier, or preamp, is the circuitry that amplifies the low level signals from your microphone up to what is known as ‘line level’ i.e. the “standard” operating level of your recording gear. Its quality makes all the difference when using condenser microphones as on the H4n Pro. The pre-amps on the H4n Pro are really good. They give everything great depth and clarity, allow recording at levels up to 140dB SPL without distortion, and a low noise floor.

What does 140dB SPL mean? SPL is Sound Pressure Level – sound being nothing other than waves of air pressure hitting your ear – and it is measured in decibels or dB.

140dB SPL is very, very loud. It is a jet aircraft 50 metres away, it is a level that will cause definite long term damage to your hearing. The H4n Pro can handle this level without distortion, which is pretty impressive. If you want to test it, make sure you are wearing professional quality ear defenders. More usefully, it means that most levels you are likely to encounter are easily within its range.

And what about that a low noise floor? All electronic devices produce some level of background noise just by virtue of having electric circuitry whirring away. You can hear it very well if you turn up the levels of a cheap stereo to full volume when you’re not playing any music on it. The noise floor is the level below which sounds cannot be distinguished from the background hiss, and the H4n Pro’s is very low. This allows you to record quiet sounds of nature, for example, insects buzzing, leaves rustling, in a way that retains a clear and crisp sound when amplified. Additionally, it means that you can have lowish recording levels to allow for sudden loud sounds without going over your peak level.

From a field recording point of view, where controlling the volume of sound arriving at your machine is sometimes not even  possible, these parameters make all the difference.

The stereo condenser microphones in the crossover pattern atop the H4n Pro have two width settings. This is great for field recordists. You can choose the 90° setting for a focused recording from a particular sound source, or the 120° for a wider, more ambient feel. One reviewer described the results of the latter setting as ‘almost binaural’. They’re good little mics too, which contribute to the high and low level results described above.

Sooner or later you’ll be wanting to use external mics, and there are all manner of options for connecting them. The 1/8″stereo jack is simplest (with optional plug-in power, yay) And there are the twin XLR or 1/4″ sockets. The XLR’s being lockable, which many reviewers appreciate – you don’t want your mics coming unplugged while on the move.

Only one thing is a serious concern for certain uses (though it won’t much affect pure field recordists). Some were dismayed that +4dBu line-level is not supported. This mostly impacts how it interacts with mixing desks and other studio equipment. Here’s what Zoom have to say about that matter:

The line input of the H4n is compatible with consumer audio equipment (-10dBu). However, some mixers output +4dBu, professional audio equipment level. In this case, you have to turn down the master volume of the mixer to prevent input level over.

Aside from that there no significant gripes.

How is it to use?

Well there was one other gripe: it takes a few seconds be ready to go after you switch it on, particularly if you have a big 32gb SD card in there. But once you have it switched on it can be left in pre-record mode, so it’s effectively recording all the time, and when you press record it retains the two seconds before that moment, so you won’t miss a thing.

It’s pretty easy and intuitive to use. You can’t miss the big red record button. You do need to read the instructions (I know!) and familiarise yourself with its features to get the best out of it. The rubber coating minimises handling noise if you’re recording hand-held, and of course it has attachment points to put in on a mic stand or tripod to avoid that risk.

You can record in MP3 or Wav format. As a field recordist you’ll mostly be using Wav, because MP3 compresses the file and loses some of the quality. Wav files are much bigger, so you’ll need to get yourself one of two of those 32 gigabyte SD cards – it doesn’t come with one. To get the sound out of the device and onto a computer you can either connect it via the USB output, or I prefer to take out the SD card and slot that into my laptop.

It does come with Cubase LE software for sound editing, and that’s whole other area to get into.

The H4n Pro is pretty much a fully-functioning four track recording studio, with many professional level effects for musicians. For the purist field recorder much of this is not necessary, and you might think a simpler device would be a better option. That’s not so easy to find though, for some reason, recording quality often goes hand-in-hand with multiple features. But you can use the H4n Pro without ever getting into its effects capabilities and it will to a great job for you. On the other hand, so many of us who are into field recording are also musicians, in which case it’s all good!

Put a sock on it

If you’re recording outdoors you will need wind protection to sit over those microphones, and you can get a furry windscreen from Zoom. It’s a bit pricey and you can buy cheap imitations, but often they just don’t do the job. Making your own is also an option, here’s a guy on Youtube doing just that, for a similar device.

Should I buy one?

At this price point the H4n Pro is an excellent device for field recording, as well as being a versatile all-rounder. It’s sturdy and portable, so you can make professional quality recordings whenever the spirit moves you.

And finally, these recorders hold their value pretty well – you won’t find hundreds of used ones up for sale on eBay. If you buy a new one and look after it, down the line you should be able to sell it easily at 70-80% of the original price, if you really need to.

Do have experience of using the H4n Pro for field recording? Leave a comment below!

One comment on “Zoom H4n Pro Handy Recorder – all you need for field recording.”

One of the most detailed post regarding h4n pro I’ve seen! I’ve been researching about field recording devices for a couple of days. Planning to get for my brother who is currently working on his Youtube channel and usually he will go to the jungle to record survival tips but is always complaining about the audio. I hope this will solve his issue! Do you have any recommended reliable website(s) that I can get it from? Thanks =)

The Listening Field, all rights reserved.